As the Ravens Gather The unsettling gloom during midday left the Master of the Fortress’s eyes cast in darkness as he looked out into the deep blue-black sky. The sun marred by a dark occlusion cast the great forest around him into an unnatural gloom allowing the brighter stars to shine. The room was a flurry of activity as acolytes and attendants packed up the most important of records and items for the transports in the busy courtyard below. Sevyrithae, his assistant and nephew, approached from behind him.

“The Magisters report that the link is made and the Evithra’Sovyrian will be ready in hours. However, the First Magister says that the Stone’s power is great and causing the Evith to weaken the curtain between worlds around it.”

The Master did not turn around but nodded his awareness of the statement as he continued to stare at the impending doom that seemed no more than a dark cloud in a summer sky.

“Master….Uncle, the Seer wishes me to pass a seeing to you.” The lad momentarily shifted to stand like a student before a teacher and recited.

“The fabric of the world will be torn with a needle, first and prime will become one.
The upstart will tend a garden of aspirations that will bring suffering and draw war.
A crow will pick at the dead and darkness will cover thought and ravens will gather, growing fat and numerous.
A gardener grows the bramble but is wounded by the briar.
Forsaken blood, dishonored blood, destiny’s blood, tainted blood, the blood of war. They may bind the tear or rend the fabric asunder.”

The older elf turned his gaze to the preparations underway below to think and then turned towards his kin slowly. The boy’s eagerness at the journey ahead caused him to bounce on his toes from time to time, his mother’s trait as well. The Master was no less eager to leave but more aware of the destruction impending upon Golarion and he mourned for its coming pain.

“There is little we can do. Inform the First Magister that the last of our people will be leaving within the hour to join them at the Evithra’Sovyrian. Now let us gather our own things my nephew and prepare to leave our home and pray that whatever this blood soaked world that Golarion will become will be one that we wish to return to.”

In -5293AR Earthfall struck and darkness covered a wounded world soon after. Age replaced age replaced age and men tried to conquer the empty lands surrounding the Greenbelt but were turned back again and again. Humans settled around it and handfuls of the bravest or most lost found refuge within it but the lands that would become the Stolen Lands proved daunting and dangerous. Throughout this expanse were places where few mortals dared entering and those that did emerge were changed. Fae danced within ancient groves, servants of outer gods sacrificed beneath gibbous moons and the rocks and green whispered of Powers that walked the land.

In 4710 AR, during a period of instability, the Lord Mayor of Restov and Rostland Ioseph Sellemius ostensively under the auspices of the King Noleski Surtova of Brevoy, embarked upon yet another attempt to settle the Stolen Lands.

This is the story of the men and women who attempted what great nations and monstrous alliances could not.

Begun in June of 2010 the heroes of this tale have grown and evolved a story that includes characters from all over the Stolen Lands and beyond. The story however focuses on our heroes and how they have brought not just civilization and order to these lawless lands but a measure of redemption for many of the people within it.

Kingmaker - As the Ravens Gather fellwalker 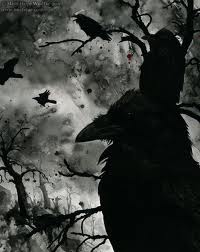 Kingmaker - As the Ravens Gather Comments

All right, let’s do this. Weather-beaten crow familiar, here I come!

I only suggested that because I thought you were skipping Varnhold’s Vanishing and kind of wanted to play that.

I’m not playing this out, I hope to write it up as a tale. It’s an excuse to give four NPCs that aren’t cohorts or minions a free level outside of the game. I wouldn’t waste a session on NPCs.

As for the B-team adventure . . .
To be honest, I just don’t get to play Yorick often enough to give up a game night to play in the Kingmaker-verse and NOT be playing my favorite sorcerer.
Just my two cents . . .

1. Yorick is in favor of said member quietly and permanently disappearing.
2. Religion is no matter; the perpetrator should be brought before the Justiciar to be judged.
3. All good and neutral religions are welcomed in Narlmarch, as long as they don’t force their beliefs on anyone or interfere with anyone else’s right to practice.
4. Yorick says the Council.
5. This is an interesting idea. Anything that would warrant capital punishment would be addressed by monthly visits by the Justiciar (in Yorick’s opinion). The Council should publicly post such crimes.
6. The official stance is neutral (acc. to Yorick).
7. Corben, as far as Yorick’s concerned. If Corben wants to delegate, that’s his business.

Here are my thoughts.

1. Call for witnesses then a hanging.
2. Rescue the kidnapped and hang the perpetrator. Religion is no excuse.
3. Yes. Markoa would say Erastil. Slade would say Abadar. Corbin would say Gorum. Yorick would say Yorick.
4. Council.
5. Towns can administer justice but need to send reports to the council. If we get discover abuse of power, we deal with it as needed.
6. Live and let live (but keep an eye on them).
7. No idea.

I’m not skipping Varnhold. I’m skipping the woefully now too low level encounter/s left in Rivers Run Red (Book2). It’s not even a big site and offers little to you guys. However, it could be a good excuse to give four NPCs a level up.
I will just be moving on to the next book. I have just finished re-stating Lamashan 10.4702 and shortly will open it up to further kingdom building to bring us to Desnus 05.4703 where upon we shall embark.

So a few questions I need answered:
1. If one of the Followers of the Purifying Flame is brought to, or presents himself before, the Duke (see Events for Gozran 4702) what is the Council’s dispensation and legal procedure?
2. If kidnapping is revealed, what is the law in Narlmarch? What if it is perpetrated by a religion?
3. Is there religious freedom in Narlmarch? Is there a official religion of the kingdom?
4. Which holds the greater legal/official weight in the kingdom, the Council or the Duke?
5. How does the Council feel about towns dispensing justice/punishment on their own? Do all criminals/offenders need to be delivered to Meerover or could (an example) Hard-by administer punishment/judgement themselves? (If you want information on how/if that occurs ask. I know exactly how justice is handled in the villages, towns and city.)
6. What are the official attitudes towards the kingdoms surrounding you?
7. Who is the official commander of the militia, Korrah or Eneric?
More to come as I need them.

Hey John, are you dead set on writing up Varnholds Vanishing vs us playing it out? I would enjoy playing it using a B-team where we pick out an NPC and level them up appropriately. Does this sound fun for anyone else?

Want to know what it feels like to have your thumbdrive die and discover that pages upon pages of writing are gone? I’m trying to re-aquire on a new drive but there’s so much gleaned from the net and, more importantly, dragged from my brain that if it’s not posted or save elsewhere…sigh

Whosoever put that great pic of Turigar on his entry could you do it again and email the originals of the four NPCs to me. I, obviously, need some more training with scanning skills.

Neato. I just used the technique for Genie Wars. It took a little finesse with the pics but it streamlines nicely.

Hey, I just learned the greatest thing. You can insert a tag after the first paragraph of your post, and it will hide the rest until it’s clicked on.

I shortened up the most recent page of posts, and it’s much easier to find things in the adventure log. Yay!

If you put a space between the + and the number, it doesn’t do that underline stuff.

Hey great campaign! i love the adventure logs very in depth and easy to read =] i look forward to reading further into your world! hope you will have time to check out my own campaign, and i love feedback!

If you need help with statting up NPC’s, just ask. I don’t mind. It worked for Rudy :P

Huh…Now I wonder if it’s worth a writing exercise to write your bio…maybe like they do in Time I’ll get Ahnold Shwartz-you-know-who to write it.

Ahh Kundal…if only I had my printer connected to print you out maybe you would have fared better than being troll rended to bits.

I'm sorry, but we no longer support this web browser. Please upgrade your browser or install Chrome or Firefox to enjoy the full functionality of this site.